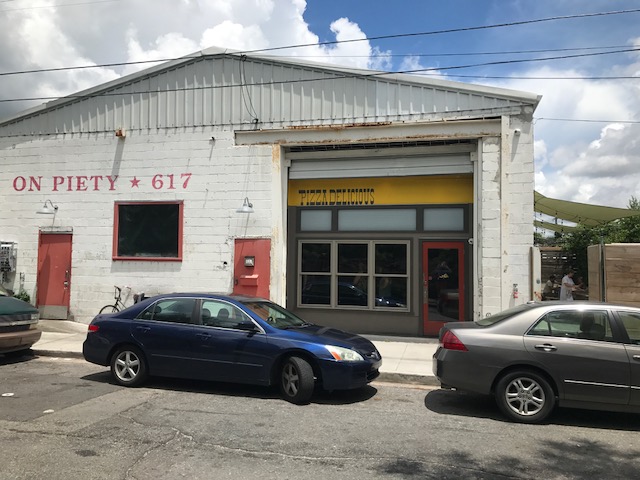 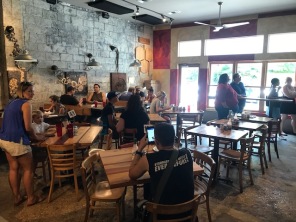 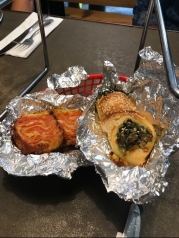 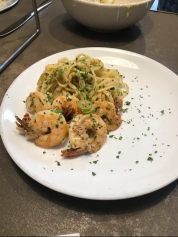 New Orleans isn’t a pizza town like New York or Chicago, so when I saw a social media post asking who had the best pizza in New Orleans and the vast majority of the respondents said this place, I had to go check it out.

Cute little place with a real (I think) Italian (that’s pronounced EYE-talian down here) throwing pizza dough up in the air in the kitchen.  We started off with a spinach-feta and a pepperoni pizza “roll”.  They were pretty good but you could tell they were pre-made and warmed up.  Maybe even in a microwave.

The Caesar Salad had a delicious dressing and was great, except for the croutons!  They tasted kind of “plasticy”, like they were made with gluten free flour, rice flour, or something strange.

The shrimp scampi linguine was utterly delicious.  The pasta was cooked perfectly al dente,  the shrimp were cooked nicely and the sauce was delicious.  BUT, for $14 it should have filled that whole plate!  I would have been pissed if I ordered that for my entree and that was all I got.  It makes a nice appetizer for two people.

The pizzas are huge.  New York thin crust style.  The pepperoni and sausage one we tried was pretty good, as was the Margherita, which was topped with mozzarella, olive oil, Parmesan and basil.  I normally prefer a veggie pizza because all those meats make a pizza greasy, but I preferred the meat pizza here.  I’m no pizza connoisseur, but best pizza place in New Orleans?  I don’t think so.  Good place?  You bet, and worth the trip.