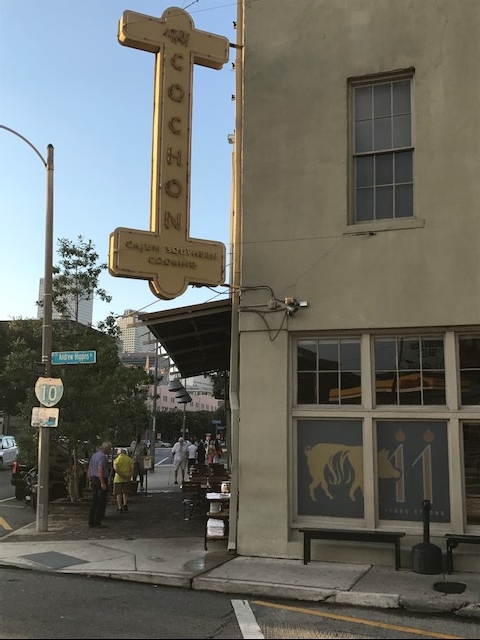 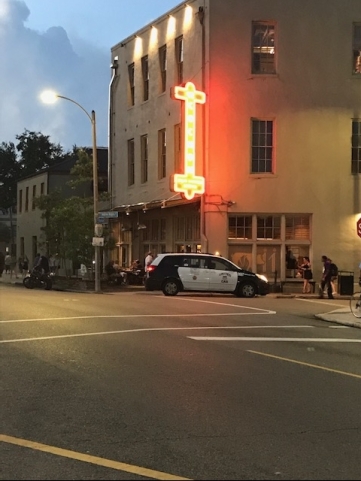 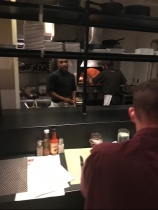 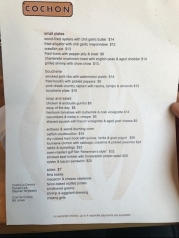 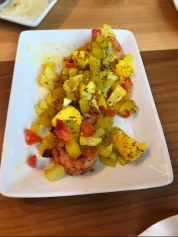 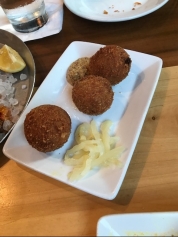 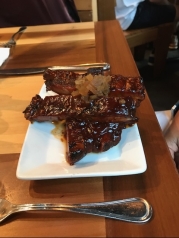 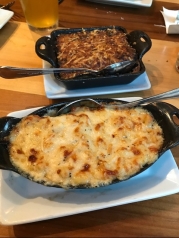 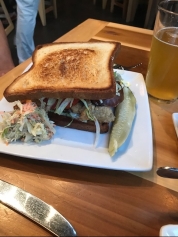 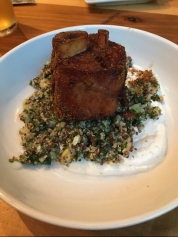 “Cochon” is French for pig.  Pretty place.  Big place.  Love the wood burning oven and the loft dining.  The sign lights up at night if you’re looking for a landmark.

Very interesting menu.  They’ll start you out with a delicious bucket of rolls that are hot, crusty on the outside and soft on the inside, but with not near enough softened butter!  I realized that after the waitress walked off and by the time she came back we had no butter and only one roll left.  So we started a discussion at the table about whether of not we should get more butter for just one roll.  I’ll take this opportunity to address the wait staff.  The way the conversation went she SHOULD have said, “Oh, I’ll gladly bring y’all some more rolls and plenty of butter”.  Instead she stood there with a dumb, blank look on her face until we decided we didn’t want anymore rolls or butter.  The wait staff seemed pretty slow and inattentive.

Grilled shrimp with chow cow (pickled veggies), delicious.  Fried boudin balls with hot mustard, delicious.  I thought the wood-fired oysters were going to be like the famous char-grilled oysters at Drago’s, but they weren’t.  If you don’t like raw oysters you might want to steer clear of these.  They were barely, and I mean BARELY cooked.  Slightly warmed actually, but very good.  The chili garlic butter was nice.

The chicken and andoullie gumbo was seasoned well with a seriously dark roux but it was a little on the watery side.  No thickness to it at all, but pretty good.

BBQ ribs had a very tangy BBQ sauce on them, kind of like a cross between the Carolina vinegar style sauces and a traditional sauce.  They were tender and delicious.

We tried a couple of sides.  The mac and cheese and the shrimp and eggplant casserole.  Both very good.

My son had the oyster and bacon sandwich, which was huge!  Basically like an oyster BLT with kind of a seasoned mayo sauce on it, which he and my daughter said was delicious.

My dish was something else.  I settled for the dry rubbed ham hock with quinoa and herbed goat yogurt.  NONE of that sounds like it goes together.  BUT!!  The ham hock had a deliciously seasoned dry rub on it and a crust, like it had been fried, but was tender and juicy on the inside.  The quinoa and herbed yogurt balanced off the spiciness of the ham hock very nicely.  And when they brought the dish to me it looked tiny, but turned out to be a nice size portion.

Overall the food was delicious, but a tad pricey in my opinion.  Also, if someone comes here and they want TRADITIONAL New Orleans, or Louisiana food, I wouldn’t recommend this place.