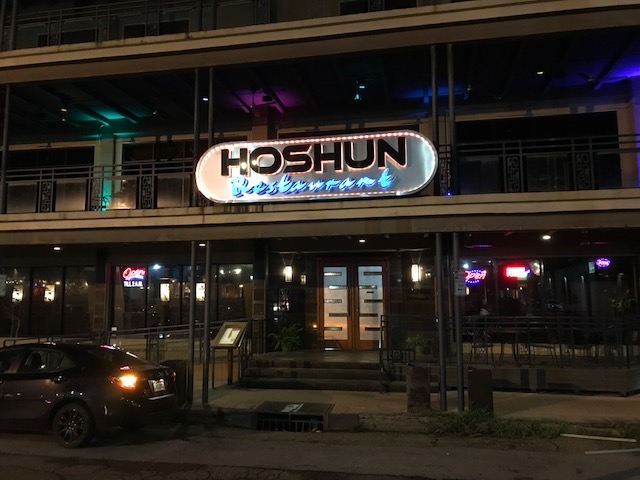 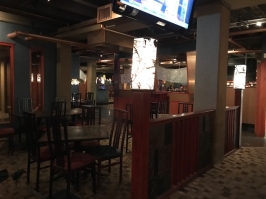 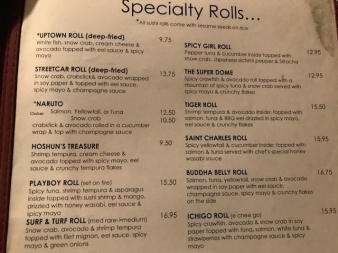 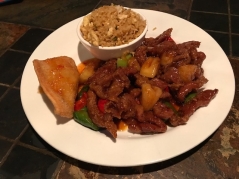 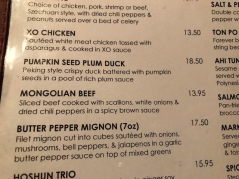 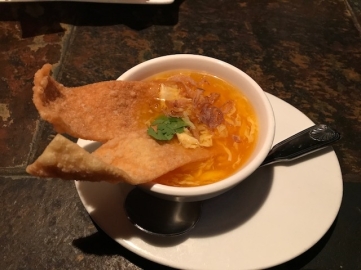 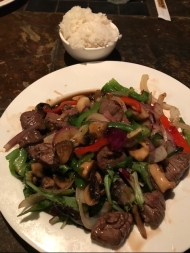 In my opinion this is the BEST Chinese Restaurant in New Orleans and every time I go there they reinforce that opinion.   A good thing is if you can’t decide between Chinese and Japanese they also have a sushi menu so you get the best of both worlds!  And they do both well.

I’ve been there maybe 10 times and each time I noticed they have the low sodium soy sauce on all the tables, which is fine with me.  But this time since I was going to report on the place I asked.  Yes, they do have full sodium soy sauce upon request.  There was a special on the board called a “Po-boy Roll”.  I asked what was in it.  Fried softshell crab, tempura shrimp, crawfish, and lettuce all wrapped in soy paper.  It was pretty good.

Their interpretation of the standard sweet and sour pork every Chinese place has is called Gou Lou Pork.  It is SOOOOO much better than your regular sweet and sour pork.  Instead of small chunks of pork surrounded in a huge amount of batter, here you get real strips of pork very lightly battered, or maybe even dusted with a coating, fried very crisp and seasoned great.  You can get a crab rangoon or a veggie spring roll with the combo platter.

The soups are good, too.  Won Ton Soup is about what you’d get in any Chinese place, but the Egg Drop soup has a very intensely flavored chicken broth.  Very good.

I’ve tried the Pumpkin Seed Plum Duck before and it is excellent.  You get a lot of duck with the dish, too.  I was in a beef mood so I tried the Butter Pepper Mignon.  Great choice.  This was one of the best dishes I ever had.  Not just in a Chinese place.  ANY place!  The beef was unbelievably tender, cooked to order and it seemed like a lot more than 7oz.

Dessert wise, DO NOT GET THE MOCHI.  If you want to see what it taste like, just grab some Play Doh, color of your choice, and wrap it around a little ice cream.  Bam.  Mochi.  Get the chocolate cake instead.  Delicious. 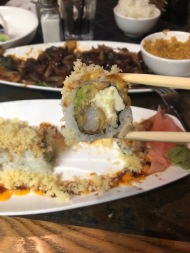 Everything was delicious, as usual, with one exception.  The Hoshun Treasure Roll had way too much cream cheese in it, as you can see from the slice I’m holding up with the chopsticks.  All you could taste was cream cheese.

One other problem we experienced this time was the service.  The dishes came out in the order pictured and listed.  Problem was the Potstickers and Baked Salmon were appetizers.  Not only are they listed in the appetizer section of the menu but we specifically ordered them AS appetizers.   I asked about them when the first two entrees came out and our waitress said they were still being prepared so she decided to bring out the food that was ready.  When the last sushi roll came out and there was still no sign of the Baked Salmon I told her cancel it.  She went to the kitchen and returned to say it was almost done, which I figured of course, so she’d go ahead and bring it out and not charge us for it.  I’m ALWAYS cool with not getting charged for food so I graciously allowed that to happen, and it was delicious.

One tip.  The entrees come with white rice but for an upcharge you can get fried rice.  Just go with the white rice.  Nothing special about the fried rice.  And the entrees are so good you don’t want anything competing with their flavors.  Just some plain, white rice is great to compliment and soak up the sauces. 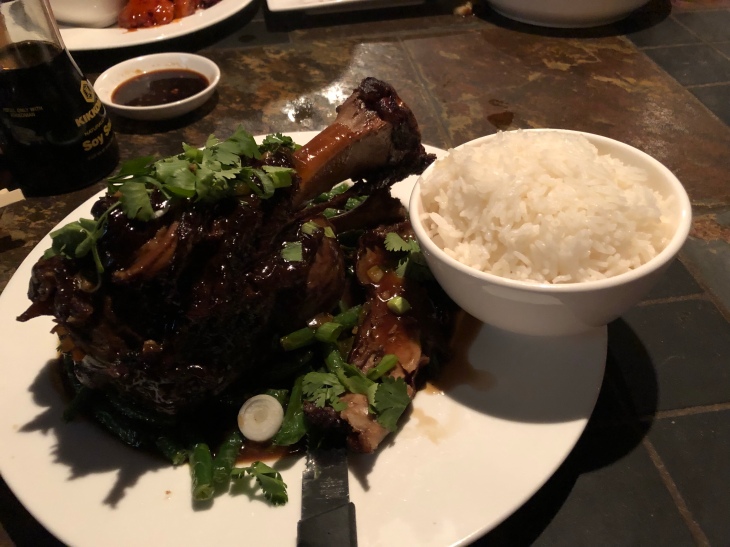 I’ve had the Surf and Turf roll before and loved it. They messed it up a little tonight. The beef normally has a nice, chargrilled flavor. Tonight it had a taste of some kind of fuel to it. Like if someone starts a charcoal fire by sprinkling plenty of lighter fluid on the coals, then puts the meat on the grill before all the lighter fluid burns off, so the meat gets some of the fluid flavor. The roll was still pretty good though.

I had never tried this Ton Po Pork Shank before. It was delicious! And HUGE! It’s hard to tell how big it is in the pictures but trust me, you won’t finish it. Unbelievably tender, too. Really great dish.