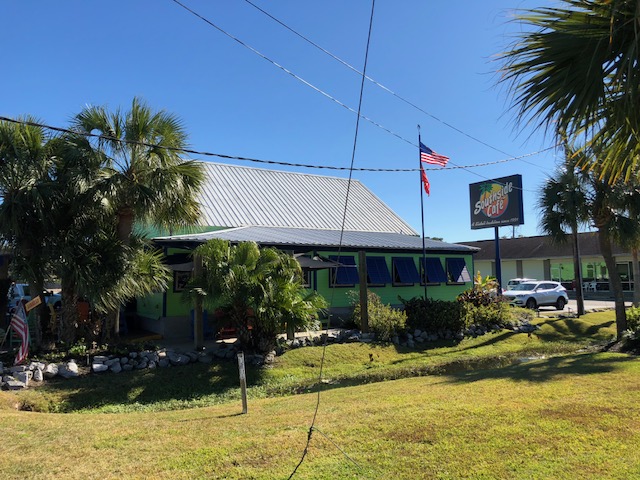 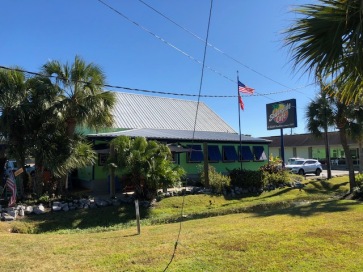 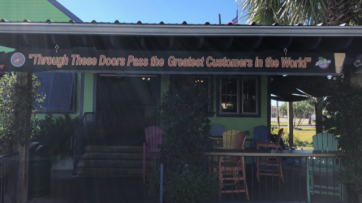 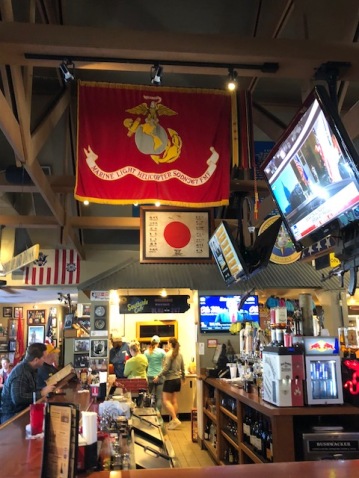 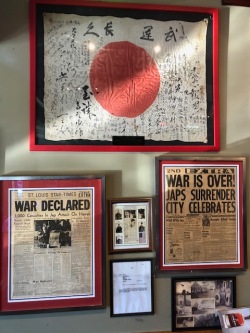 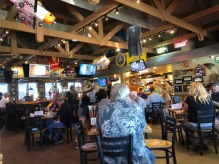 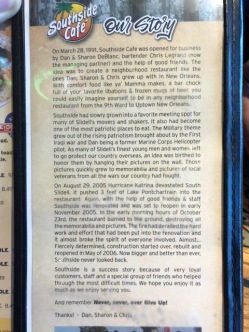 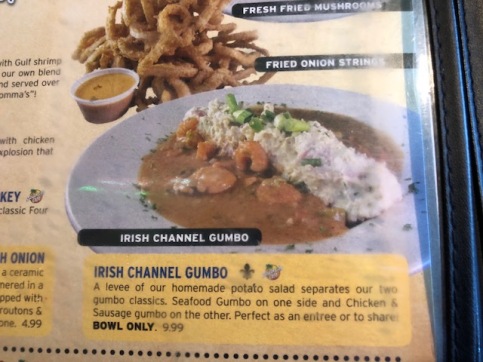 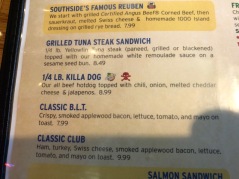 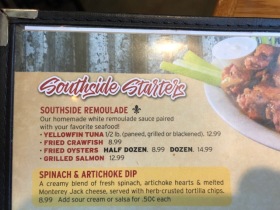 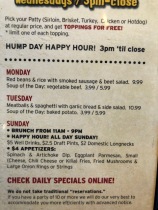 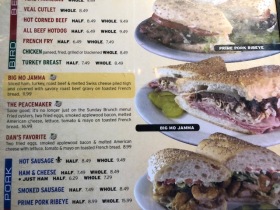 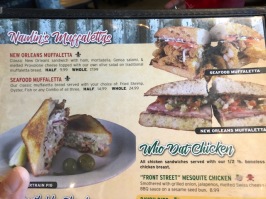 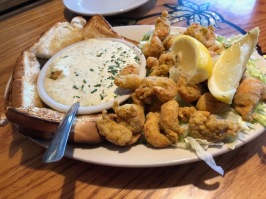 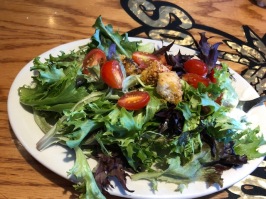 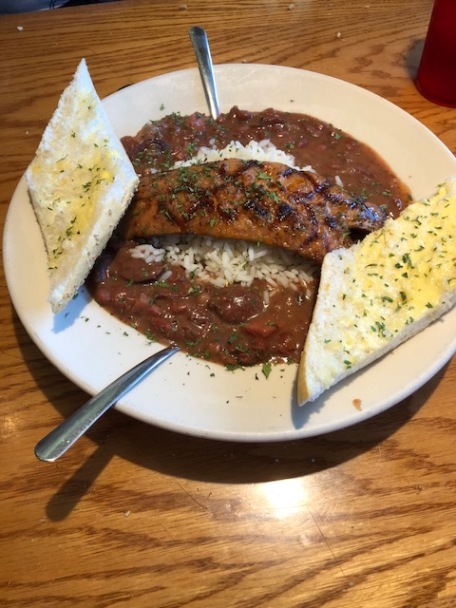 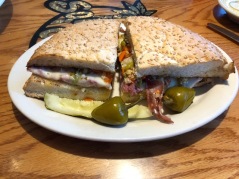 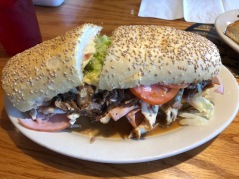 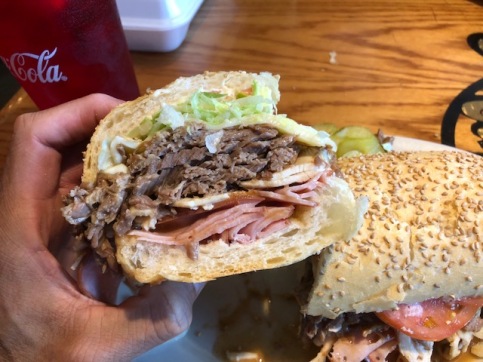 This place is in Slidell, Louisiana, which is about a 45 minute drive from my house in New Orleans depending on traffic.  It’s so good I’d gladly make the drive every week to eat there.  Not only have I never had a bad meal there, in maybe 5 visits I haven’t found one thing on the menu that wasn’t fantastic!

I love the military theme of the place, which isn’t surprising considering one of the owners is a Marine veteran.  Needless to say they do offer a military discount.  The menu is too extensive to show everything but I took pics of a few things I’ve had in the past.  Most gumbos are served with rice, but some old New Orleans restaurants and some New Orleanians, like potato salad in their gumbo.  The Irish Channel Gumbo features two classic gumbos.  Chicken and sausage and seafood, separated by a potato salad dam in the middle.  Don’t get this as an appetizer as I made the mistake of doing once.  All the portions here are very generous.  You won’t leave hungry.  Very good dish.

The 1/4 pound Killa Dog is a great hot dog.  I love their chili.  The Killa Fries, covered with chili, melted cheese, fresh chopped onions and jalapeños are also very good.

We started off with the Southside Remoulade with fried crawfish tails.  The remoulade sauce is one of the best I ever had.  You can get it with yellowfin tuna, paneed, grilled or blackened, fried oysters or grilled salmon.  When you get fried crawfish at some places the tails are tiny and mostly batter.  Here they are big tails, fried crisp and delicious.  This is a must get appetizer.

Red beans and rice on a Monday is a New Orleans tradition.  Their side salad is pretty fancy!  And as I said earlier, the portions are huge, and that certainly applies to the red beans and rice.  With a huge grilled smoke sausage link.  Delicious.

We also got a half New Orleans Muffaletta.  That’s a traditional Italian sandwich which appeared on the New Orleans food scene in the early 1900’s, and consist of different deli meats, cheese and olive salad.  This one had ham, mortadella and Genoa salami.  It’s a hot sandwich and this one was the perfect temperature.  Heated just until the bread was crispy but still soft on the inside, and not so hot the meats became greasy and the cheese was just melted.  This place has a muffaletta better than some places that specialize in muffalettas.

We also shared the Big Mo Jamma sandwich.  Ham, turkey, roast beef and Swiss cheese served hot with brown gravy.  They say it’s served on French bread, but it’s seems to me to be more like some Italian seeded bread.  Either way, this is a serious sandwich, and seriously delicious.

I give this place the HIGHEST possible recommendation!  Love it. 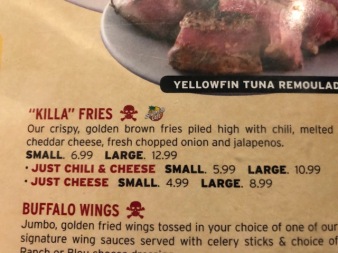 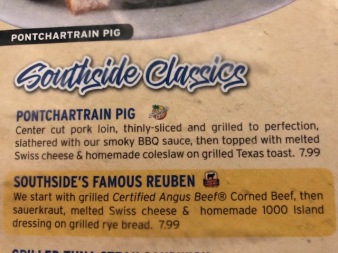 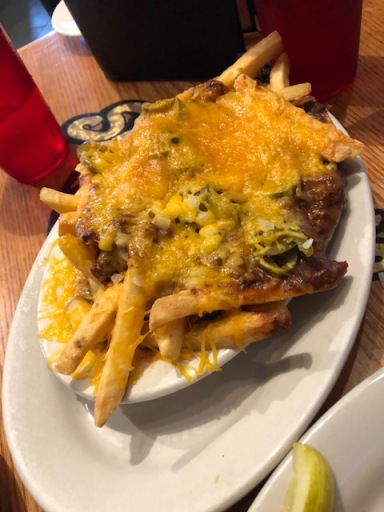 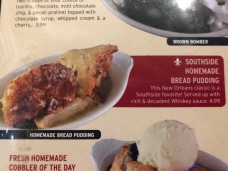 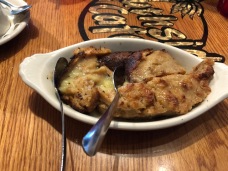 For Christmas someone gave me a gift card to Southside Café so I had to make the trip back across the lake!  The Killa Fries are great.  Love their chili.

I also tried the Pontchartrain Pig.  If you like a lot of BBQ sauce you’ll love it.  It was a little too much for me.  It was like they had more BBQ sauce on it than meat, but it still was a pretty good sandwich.  I just would have preferred a little less sauce. If I ordered it again I’d ask for the sauce on the side and add it myself.

The crabmeat stuffed mushrooms were delicious.  Plenty of crabmeat in them and seasoned perfectly.

Finally, I tried their bread pudding.  I had never tried it before because their portions are so big I’m normally too stuffed for dessert.  This time I saved a little room.  It’s pretty good!  Not the best I’ve ever had, but if you’re in the mood for bread pudding it’s definitely worth ordering.  Definitely could have used more Whiskey sauce though.  Another yummy experience at Southside. 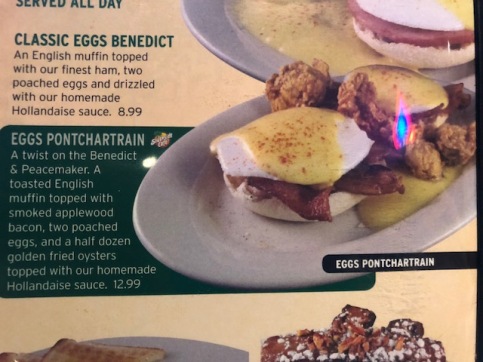 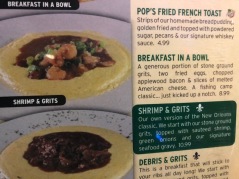 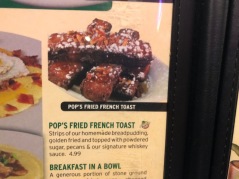 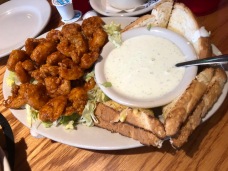 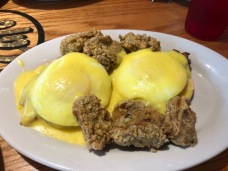 Ok.  Back to Southside during their Sunday Brunch menu time.  They open at 11:00AM so the regular menu is also available.  We got the buffalo shrimp.  They are fantastic!  A must try appetizer.  The Eggs Pontchartrain are very good too, if you like fried oysters that is.  Big, juicy, crisp fried oysters.  The menu said you get six, they gave me seven.  Probably because of my stunning good looks!  The Shrimp and Grits?  Pretty good but nothing special.  Grits were very creamy and cheesy.  If you’re in the mood for it go for it but I’ll pass on it in the future.  They’re so many other better things.  Finally, the Pop’s Fried French Toast is UTTERLY DELICIOUS!  Save some room though because they give you a bunch.  The whiskey sauce is great.  HAPPY NEW YEAR!

Took a road trip today and passed through Slidell right at lunchtime.  So we popped in here!  We ordered:

The crawfish balls were full of crawfish. The chicken breast on the Cordon Bleu sandwich was huge! The beef on the Philly was unbelievably tender and flavorful. Excellent lunch.