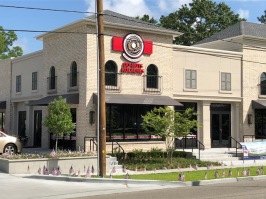 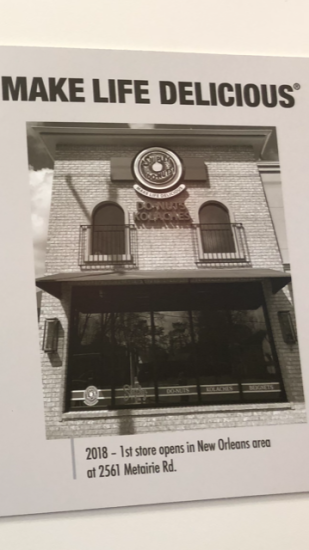 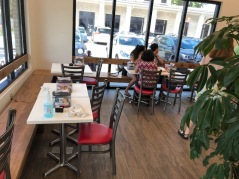 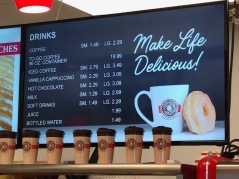 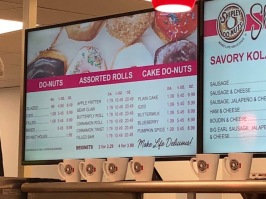 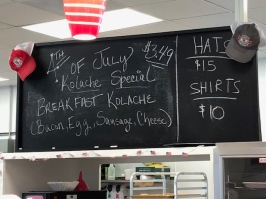 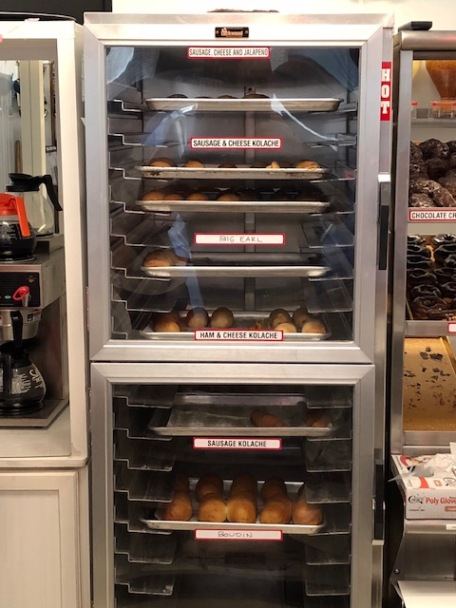 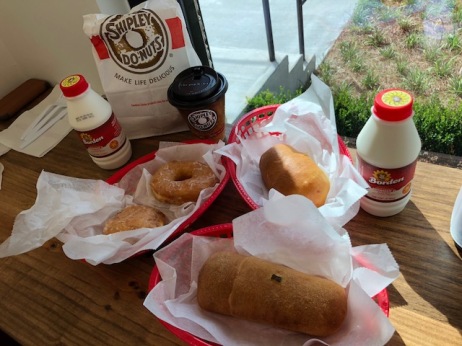 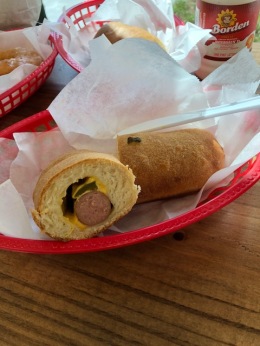 I’ve always heard of Shipley Do-nuts and knew they were popular in other southern states, but I didn’t know we had one in the New Orleans area.  And with good reason.  This is the first one and it only opened three months ago.  The building looks brand new.  Small dining area inside.  The place was packed.  I’m not sure if it’s just because it’s that popular or because it was July 4th.

Being born and raised in New Orleans I had never had a Kolache before so I had to try one.  The July 4th special was a bacon, egg, sausage and cheese one for $3.49.  I’m not sure why that was special because that was more expensive than any of the other ones on the menu, but I figured I’d try one.  Unfortunately, they were out of them and I was too hungry to wait for them to cook any more.  So we decided on a Boudin & Cheese and the “Big Earl”, which consisted of sausage, jalapeño and cheese, Kolaches.  Along with a glazed and blueberry filled donut, two beignets and a cinnamon roll.

The Big Earl Kolache was ok.  The so called sausage in it seemed to just be a hot dog.  Boudin (pronounced Boo-dan), is a pork and rice sausage popular in Louisiana, especially in Cajun country.   The Boudin and Cheese Kolache was much better.  The boudin was actually very good.

The beignets were terrible.  I’m not even sure how to describe them.  Just don’t get them.  If you come to New Orleans and want beignets just go to Cafe’ du Monde (Report #32).

The glazed donut was cold.  And not cold as in room temperature.  Cold as, as if it had been in the refrigerator.  Since the place opened at 5AM, and this was about 9:30AM, and the place was busy as hell, I’m not sure how you manage to serve a cold donut.  If you had some old ones in the fridge it seems like they would have sold out long ago.  Anyway, the donut was ok at best.  Definitely not in the league of Chris’s Donuts (Report #57).

They had a large variety of filled donuts.  Chocolate cream, raspberry, Bavarian Cream, cream, lemon, strawberry, blueberry, apple, cherry, and chocolate filled that I could see on display.  The blueberry filled was delicious.  Nice amount of filling in it too.

I didn’t try the cinnamon roll but my dining companion said it was very good, but she’d had better.

Pretty good donut shop and the only place I know of where you can get Kolaches in the New Orleans area.  I’ve had better donuts but I guess it’ll do in a pinch.