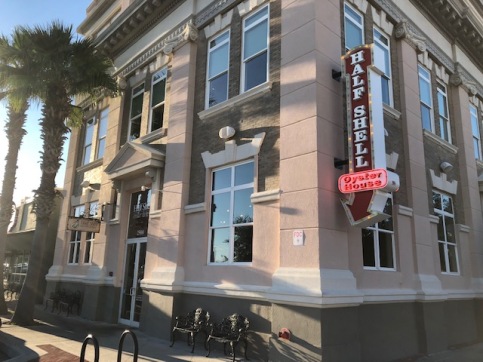 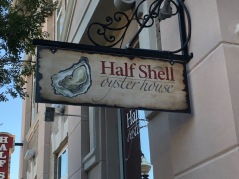 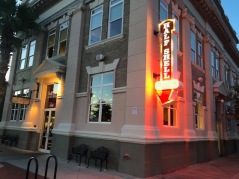 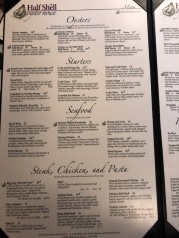 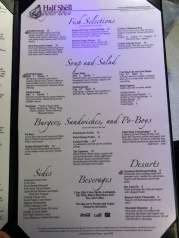 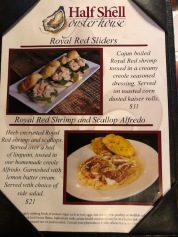 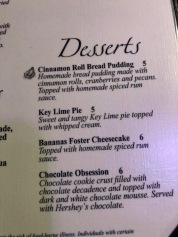 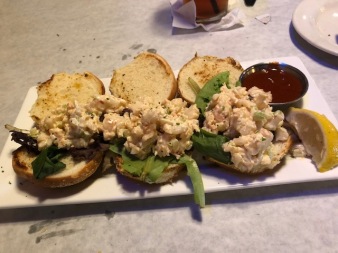 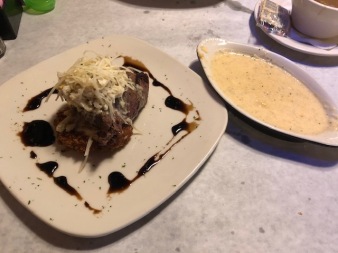 I spent a few years in Gulfport when I was on active duty in the Navy.  Loving food as I do, I often asked locals where I could find good, New Orleans style, Creole food.  I was told Mary Mahoney’s in Biloxi was the best in the WORLD!  When I finally made it there I thought the food was just “ok”.  Not extraordinary like the folks in Mississippi bragged.  But then I realize.  By Mississippi standards it probably is the best in the world!  Us New Orleanais are spoiled.  We’re used to excellent food.

If you find yourself in Gulfport craving New Orleans type food, this place is pretty good.  Easy to find, too.  It’s located right on Hwy. 49, which is the main exit off of I-10 in Gulfport, just a block from the beach.

We started off with a half dozen chargrilled oysters.  They were pretty good but very small, as you can see by the one I’m holding on the end of a cocktail fork.  Maybe because they were so small they gave us seven to make up for it.  Or maybe the cook is a public school student and thinks 12/2=7.

I got a cup of seafood gumbo as one of my sides.  It was ok.  Loaded with shrimp and a little crab meat.  I added a little hot sauce to it.

My dining partner got the Pasta Half Shell.  Linguini Alfredo which she got topped with fried shrimp.  She said the fried shrimp were delicious.  Large, well seasoned and fried nice and crisp.  However she said the pasta wasn’t seasoned well at all.  She had to add salt and pepper to it.

I decided on the Big Easy Surf and Turf.  A 6oz filet served on top of a crab cake, and topped with jumbo lump crabmeat and Parmesan cheese.  This was a delicious dish.  The crab cake was full of crabmeat and fried crisp in a cracker crumb kind of coating.  The steak was very tender and cooked perfectly.

For dessert we started to try the Bananas Foster Cheesecake, but decided on the Cinnamon Roll Bread Pudding.  How could a bread pudding made out of cinnamon rolls be bad?  I should have went with the cheesecake.  Not that the bread pudding was horrible, but it was really dense and I prefer a lighter bread pudding.

Overall a pretty good place.  I recommend it.