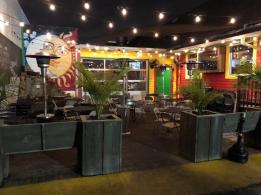 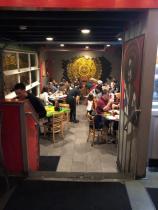 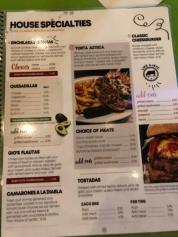 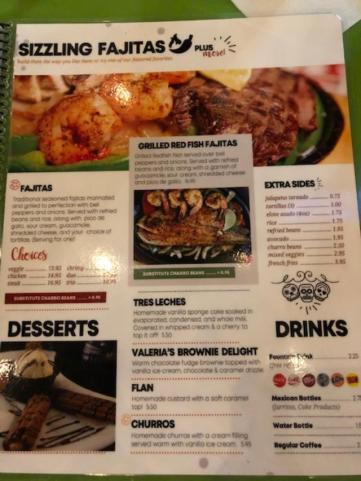 The Super Bowl is the day after tomorrow.  Being a native New Orleanian and diehard Saints fan, I’m still depressed.  If you don’t know why, what rock have you been under?  It was just the worst thing not only to happen in NFL history, but in WORLD history!

Anyway, being depressed or not I still have to eat.  A friend recommended this place.  Cute little place, with an outside dining area it was a bit cool to utilize.  They only take reservations for parties of 6 or more.  We arrived at about 6:30 PM and was told it’d be a 20 minute wait for a table, but we could sit at the bar.  So off to the bar we went.  Worked out great.  The bartender was a really nice guy.

They say they serve “Authentic Mexican Cuisine”.  I don’t claim to be an expert on that, but when I think of authentic Mexican, I think of dishes with all kinds of mole sauces, tongue, tripe, white hominy, pumpkin seeds and Carnitas.  This menu was just your typical Tex-Mex kind of fare.  Except for the Elote.  I’ve been dying to try that for years.  So, this is some of the things we decided on: 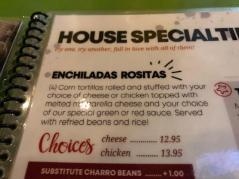 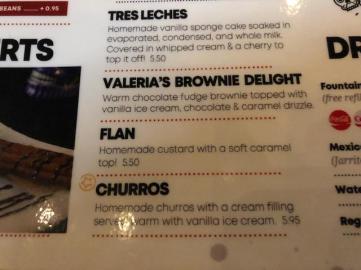 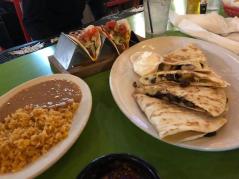 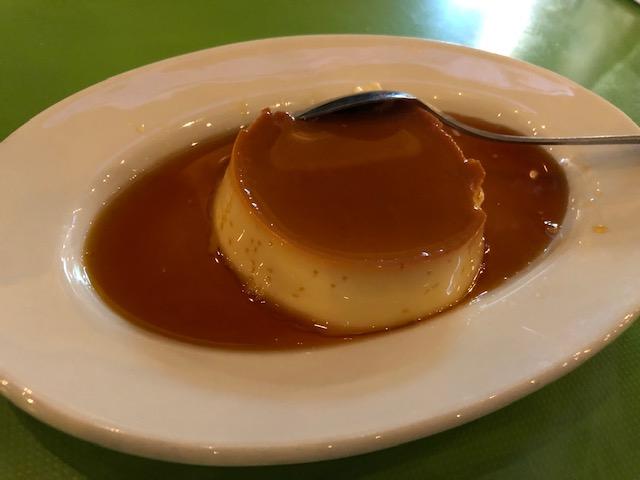 When I was trying to make a reservation on Yelp, I happened to see a really bad review on the Elote Loko.  A corn mayo, butter and parmesan cheese dish.  But I thought it was pretty good.  The little container of red sauce they served with it was really delicious.  I asked the bartender what it was and he said a habanero and ghost pepper sauce.  I told him for having those types of peppers it wasn’t spicy at all.  He said that was a milder version of it, with a lot of citrus.  I could definitely taste the citrus in it, and a bunch of other things I had no idea what they were.  But it was a big, delicious bold taste.

The Jefe’s Queso Dip was pretty good.  A nice mild melted cheese.  The chips could have been fresher though.  I love it when I go to a place and it taste like the chips just came out the fryer.  These definitely just came out the bag.

When I ordered the cheese enchiladas the bartender asked me if I wanted red or green sauce over them.  When he saw I was having trouble deciding, he said, “Or both”?  I got both.  I should have said just the green.  Not that the red was bad, but the green was delicious!   The enchiladas were pretty good too, as were the rice and beans.

You build your own tacos here.  You choose from cilantro and onions, or lettuce and tomatoes for toppings.  Then four types of tortillas, numerous eats and add-ons.  We tried the carne asada and shredded chipotle chicken.  Both were pretty

My dining partner had the surf and turf quesadilla.  He said it was great.  With really nice size shrimp.

Finally, I was torn between the Tres Leches Cake and the flan.  I asked the bartender which was better.  He recommended the flan.  I got it.  I enjoyed it.

Pretty good place, but I didn’t find anything that made it any more special than other good Tex-Mex restaurants.  My go to place is still El Paso in Algiers, but if you’re in Metairie and craving Mexican, I recommend this place.