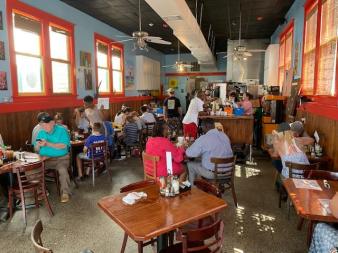 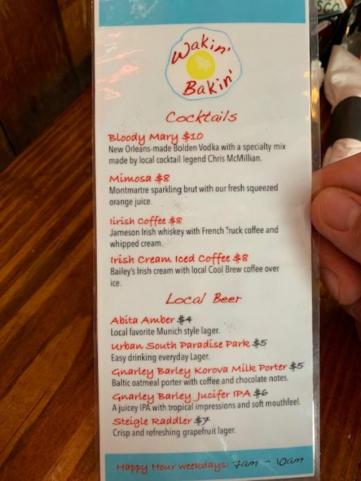 Sometimes it’s hard to find a good, Sunday morning breakfast place that’s not packed. I think I found one! Nice variety on the menu, and in true New Orleans style, a breakfast drink menu so you can start your Sunday with a buzz! 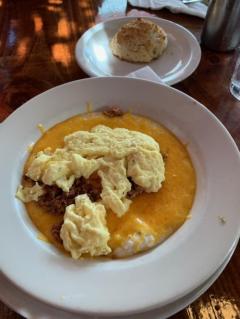 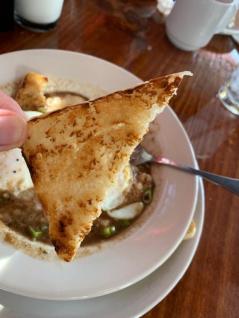 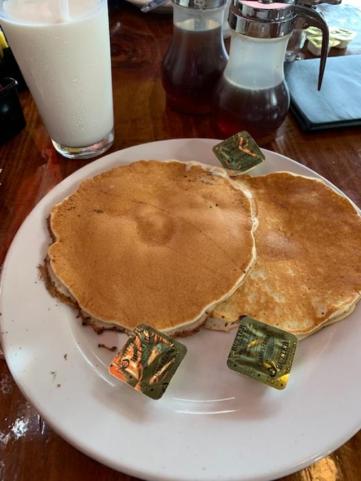 My dining partner had the Breakfast Bowl with grits and scrambled eggs.  She said it was really good.  I reached over with my fork to try a taste and got stabbed in the hand, so I had to take her word for it.

Our waitress was really great.  Not because she put direct pressure on my hand to stop the bleeding, but because she warned me about the BBQ Shrimp and Grits.  When I ordered it, she said that it wasn’t a traditional BBQ Shrimp, but had a good bit of worchestire sauce in it, so it had what she described as a Balsamic vinegar taste.

First of all, in my opinion traditional New Orleans BBQ Shrimp should have worchestire sauce in the sauce!  Second, I love balsamic vinegar.  So I told her bring it on!  But it was nice of her to warn me.  I also ordered two over easy eggs a la carte to go with it.

Someone else brought my dish out, with the eggs on top, which is what I planned to do anyway.  Our waitress came out to be sure we had gotten everything, and she said, “Oh, I see you already put your eggs on top.”  I said, “No, they brought it to me like that.”  She said, “WHAT?  I didn’t tell them to do that!  You want us to redo the dish?”  I told her that wasn’t necessary, because that’s how I wanted it.  But again, that was really nice of her.  And the dish was delicious!

I took a picture of the toast because it wasn’t your regular white toast.  They make their own sourdough in house.  It was hearty, buttery, crispy and delicious.  Hard to tell by the picture, but trust me.  It’s good.

I’m not sure why they call the pancakes “pancrepes”, but they were pretty good.  Nothing special about them.  But I do like the way they serve real butter instead of some whipped vegetable oil spread to put on them.

Great place!  I highly recommend it!

Can’t believe it’s been over a year since I’ve been here. Due to social distancing restrictions on restaurants due to the pandemic, they only have five tables inside and three outside for dining. But our waitress told us you can go to Open Table and make reservations.

Also, instead of handing you paper menus they tell you scan the code on your table and the menu will pop up on the smart phone. You can also put in your order that way, or a waitress will come around and take your order. I went with the same thing I had last time! The shrimp and grits with over easy eggs on top, and the Pancrepes.

I think these are the best shrimp and grits in the city! I was hoping they’d be as good as last time, and they were. The Pancrepes were about the same. Good, but nothing special.

The last time we went to the Prytania Street location, with the pandemic limited capacity, they were packed and we couldn’t get a table. They did tell us they accept reservations via OpenTable. But today we decided to try the Banks Street location, thinking maybe they had a bigger dining room and we could get a table. Well, we got a table, but the dining room here is the size of a large bedroom. This place is tiny!

My dining partner enjoyed the Breakfast Bowl. Two scrambled eggs with melted cheddar and “bacon confit” (more on that in a second) over hashbrowns.

I got the bacon confit, swiss cheese and caramelized onions in my omelet. It was very good. I asked our waitress what bacon confit was. She told us they take bacon ends and slow cook them a long time, until all the fat is rendered out and they just fall apart, something like pulled pork. The last picture above on the right is a chunk of it. Really yummy.

I’m kind of glad they were out of grits because otherwise I never would have tried the hashbrowns. They’re not shredded potatoes. Seems more like they take whole, small red potatoes, cook them, then flatten them so they’re all squished together, and brown them on both sides. The result is delicious!

I didn’t care much for the Pancrepes here. They had a dry, mealy texture.

Pretty good place for breakfast if you’re in the Mid-City area.

Back to the Prytania Street location again today for the first time in a long time. More tables back in the place since this pandemic is winding down.

My dining partner ordered the BlueJay Special and I went with those delicious BBQ shrimp and grits.

But then we were told they were out of grits! I was sad. We decided to go with those breakfast items, but with the Cajun Smashed Hash instead of grits. Those are red potatoes boiled in crab boil, then smashed, and fried super crispy.

Both dishes were delicious! Even if they have grits I’d advise give the BBQ shrimp a try served over those potatoes. They are great! Fantastic breakfast.

Back today to the Prytania St. location and we tried a couple new items:

Did I already include a picture describing their Bacon Confit? If so I’m sorry to repeat myself, but I’m just like everyone else. I don’t read these boring reports either.

My dining partner had the OG Bowl with a biscuit, and I had the Meat Monster omelet with grits. Both dishes were great! The grits were fantastic today. Very creamy, and with the butter I added they were nothing but delicious.

That’s all for today.