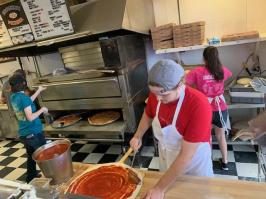 I spent 5 years in Gulfport, MS, drilling with the Navy Reserve.  During that time I discovered this place.  I love thin, crispy, New York style pizza, and this place does a good job with that.  We decided to stop in for some before we headed back to New Orleans today.

As soon as you walk in, the first thing that strikes you is how long and narrow the dining room is.  I think the black and white tiled floor gives the illusion it’s longer than it actually is.  After we ordered I walked to the bathroom all the way in the rear and when I got there I thought, “Wait, I made it here already?  It’s not as far as I thought”!

Anyway, we decided on a few other things besides pizza.  I got a slice of pepperoni.  We also got a sausage, pepperoni and mushroom Stromboli, Cheese Manicotti with garlic knots and a half Muffuletta sandwich.

The pizza was as good as I remembered it.  Thin, crispy, nice and hot and delicious.  They use that same thin crust to make their Stromboli.  Also very good.

I loved the Manicotti.  It was stuffed with plenty of cheese and the sauce was great.

Now the Muffuletta.  I’ve never had one outside of New Orleans.  I was curious to see if they’d make a good one in Mississippi. Well, there’s no way to sugar coat it.  It was terrible.  The olive salad was chopped up real fine.  Close to pureed.  Doesn’t seem like that’d make a big difference but it did.  There wasn’t much meat on it or cheese.  We both took two bites and just left the rest.

If you want a good Muffuletta and you’re in Gulfport, MS, drive to New Orleans and stop at Di Martino’s!  If you want a great NY style pizza, stop here.