I’ve been wanting to try this place for awhile, and when I saw they had a COOLinary menu, I figured this was a great opportunity to do that.  August is a slow time for restaurants. To combat that, during this month numerous restaurants offer a prix-fixe menu at a special price, called COOLinary menus.  This was theirs:

My dining partner and I decided on the following:

2nd Course – Entraña and Costilla with Patatas Bravas and Aligot 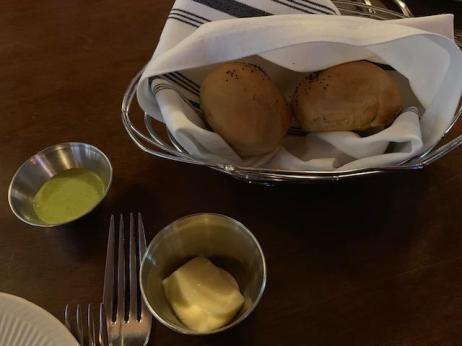 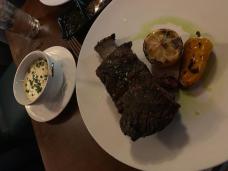 First, and definitely worth mentioning, was the bread.  Good hot rolls, but the star here was what it was served with.  Besides the nicely softened butter there was a green aioli, made with garlic, mint, cilantro, lime, jalapeños, and something else I may have forgot.  I sliced my roll in half, spread butter on one half and the aioli on the other, and wished I had put the aioli on both sides!  It was fantastic.

Next was the Avocado Asado, which was a half grilled avocado stuffed with Crabmeat Ravigote and Arugula, and the Gnocchi.  Both were utterly delicious.  I had to ask for more bread to sop up the rest of the sauce they served on the Gnocchi it was so good.  It was either that or lick the bowl!

The Entraña was a 10oz Skirt Steak, and the Costilla was a Black Angus short Rib.  Both were very tender and flavorful.  The rib had a nice char on it which I love.

The Patatas Bravas were crispy cubes of fried potato with a cheesy tasting smoked paprika aioli on them.  And speaking of cheesy, you’ll never have a cheesier, creamier, mashed potato dish than the Aligot.  Both were outstanding.

Finally dessert.  The vanilla honey ice cream served with the freshly made hot churro had a consistency more like whipped cream than ice cream, which was incredible.  And the S’mores Pie was one of the best desserts I’ve ever had!

COOLinary menu or not, I highly recommend this place!