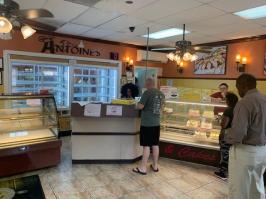 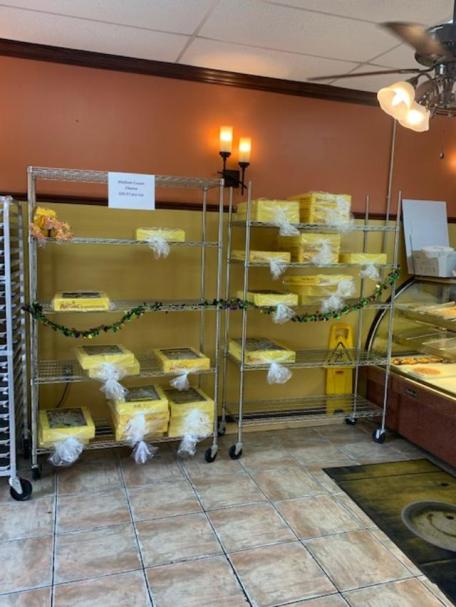 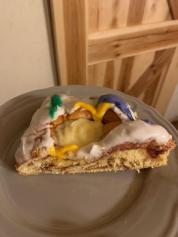 I moved to the Westbank of New Orleans 22 years ago.  The Home Depot I frequent is right across the street from this bakery, and one of my favorite Mexican joints, La Fiesta, is on the same street a couple blocks away.  That being said, I’ve driven past this place a hundred times and somehow never noticed it!  Or paid any attention to it if I did.  Then a good friend told me about it.

It’s King Cake season in New Orleans.  My friend said this joint had good ones, so I decided to come grab one.

It was about 1:30 PM on a weekday when I walked in.  There wasn’t too much in the display cases.  Not sure what kind of pie that was pictured above, but it looked damn good!

There were numerous plain and stuffed King Cakes on a couple of racks.  When I was a kid there was no such thing as a “stuffed” King Cake.  Then some genius got the idea to put filling in them, like a cream or jelly donut.  Now they’re very popular.

I love the cream cheese stuffed ones, but there were none on the racks.  I asked if I could get one, they said give them 4 minutes,  then brought it out!  All they do is take a plain one and pipe some filling in it.  If you’re having trouble deciding between plain and filled, get the filled.  Not every inch of the cake will be filled, so you’ll have a lot of plain parts to try.

It was very good!  Nice and soft with a great cinnamon flavor.

Oh, finally, instead of King Cakes they call theirs a “Queen Cake”.  I asked why, and the lady waiting on me didn’t know.  I guess it’s just to be different.

Looking forward to trying some of their other goods.