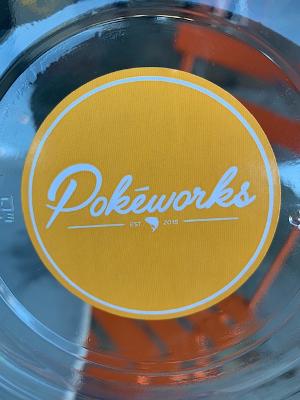 The word for what’s served here is pronounced “poh-KAY”, and rhymes with “okay”. I looked it up to see what the definition was and found, “jab or prod (someone or something), especially with one’s finger”.

I quickly realized I looked up POKE, and corrected that. Poke is, “diced raw fish served either as an appetizer or a main course and is one of the main dishes of Native Hawaiian cuisine”.

I first had it when I was in Hawaii in 2000, doing some Navy duty, and loved it. I last had it at a place called Poke Loa located in the Irish Channel neighborhood of New Orleans. They do a good job with it there.

They have a lot of signature poke bowls, but I decided to create my own. You chose a base, protein, mix-ins, flavored sauce and toppings. I got a large bowl with three proteins. I decided on sushi rice as my base, spicy tuna, salmon and shrimp (cooked) as my proteins, cucumber and seaweed as my mix-ins, Umami Shoyu and Sweet Shoyu on the side as my sauces, and avocado, wasabi, sliced Nori seaweed sheets and Masago (orange fish eggs) as toppings.

My dining partner got his made as a burrito. He had sushi rice, salmon, shrimp, avocado, kale, corn, and cream cheese in his. I know I’m forgetting something but you get the idea. In the last two pictures above you can see how they put it together and roll it up like a big sushi roll.

We both got combo meals. They come with either chips or Miso soup. I got chips and my dining partner got the soup.

I’ll just say everything was delicious! Very fresh tasting and quite filling.

The last dish pictured, which we did not have but I wanted to mention, is Garlic Spam Musubi. Back in 2000 when I was doing that military duty in Hawaii, I was working with an Air Force Captain who was a native Hawaiian. One day he made Spam Musubi and brought it into the office for us to try. I hate Spam. If you ever go to Hawaii you’ll see it all over the place. Even in the finest restaurants.

Well, the musubi he made was great! He basically pan fried thinly sliced Spam with some soy sauce and a little sugar, put it on sushi rice, wrapped it with a strip of seaweed, put it in a rectangular mold and pressed it so it wouldn’t fall apart when picked up.

I was looking forward to trying it here because I thought they may have made it fresh, but they don’t. It was sitting out on the counter prepackaged, so I decided to pass.

As a side note, I went next door to Chez Pierre for dessert and grabbed a beautiful looking little cake that they TOLD me was lemon Doberge. It was tasty, but it wasn’t Doberge cake. I was lied to. You can click on Chez Pierre if you’re interested in reading about that.