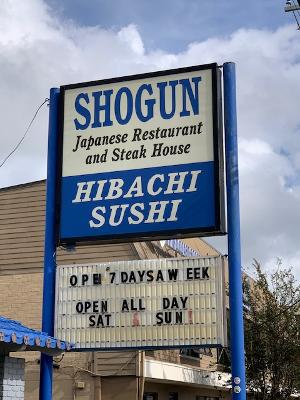 I’ve reviewed numerous sushi joints in and around the New Orleans area, and can’t believe I’ve never reviewed this one. Why you ask? Because when this place opened in 1981 it was the very first place in the New Orleans area to have a sushi bar. Other restaurants had served sushi, but didn’t have a bar where they’d prepare it and serve it to you right before your eyes.

I was in high school in 1981 and remember the sushi craze. I didn’t participate because the idea of eating raw fish didn’t appeal to me at all. Then sometimes in the 90’s a young lady introduced me to sushi. It was like when Eve gave Adam the apple. Changed me forever. Now I love it.

Nice looking place. The aforementioned sushi bar, two dining rooms, one with a Hibachi table, and a small bar with a guy behind it wondering why the hell I’m taking his picture.

The Gyoza Dumplings were very good. Served with a perfectly tart Ponzu sauce.

Some kind of little mainly bean sprout salad and Miso soup came with our entrées. Both were nice.

My dining partner enjoyed her Beef Teriyaki Lunch. She said the beef was very tender and really good. She didn’t even need a knife to cut it.

I had the Teishoku Lunch, which they describe as a “Typical Japanese Business Man’s Lunch”. If that’s what it is, Japanese businessmen have it pretty damned good! I got the grilled eel for my protein. Outstanding! You also get a little bowl of tempura fried chicken, sashimi consisting of white fish and tuna, edamame and white rice. I’d definitely order this again!

I saved the best for last. I often wonder why sushi joints in the New Orleans area use imitation crab in their rolls when we harvest tons of blue crabs here. When I saw the blue crab roll on the menu I had to try it.

It was utterly delicious! I’ve ordered things like lobster tempura rolls at places, and they’ve got so much other stuff in it you can’t taste the lobster. Well, in this thing almost all you can taste is that delicious blue crab meat! Try this if you come in.